The events in Boston this week, and what a week it has been, are personal to us here at CommonPlaces. We are located within a thirty minute drive of Boston, and everyone in our office knows the city very well. Our company name is taken from Boston Common, the community park and central location for all people to gather. I can't tell you how many times I have stood on Boylston Street, just up the street for the Common, watching the runners cross the finish line at the Boston Marathon. We all know people who have run that race. When those explosions rang out at 2:50 p.m. on April 15, the blast was felt by everyone in our office.

The horror was followed by anger, then by resolve. We can all be immensely proud of the first responders, to be sure, but also of all the citizens of Boston. The stories of selfless bravery on that gorgeous afternoon are too numerous to mention. As an extended community, our grief for the victims was universal. Later, when the Boston Bruins played the Buffalo Sabers on Wednesday night, the unified but still stunned crowd which filled our beloved 'Gahden' burst into a spontaneous rendition of the national anthem, taking over from singer Rene Rancourt. That moment produced goosebumps for many of us.

The slogan, Boston Strong, soon became a powerful rallying cry across the country and beyond. Then, on Thursday, an interfaith ceremony on Thursday morning brought together a diversified cross-section of dignitaries, religious leaders, and common citizens. When the President vowed that the marathon will be run again, the crowd rose as one to cheer. My coworkers and I at CommonPlaces echo the resolute strength of that cheer. As you have undoubtedly heard many times this week, Boston isn't to be trifled with.

Then, madness returned shortly after the release of photographs of two unknown suspects. Within hours there would be an attempted robbery, a murder, a carjacking, a car chase, and a running gun battle featuring hurled explosives. One suspect was killed while the other brought upon himself the most unprecedented type of manhunt in history. A million people were ordered to stay off the street. Conventional and social media dug in and produced ceaseless coverage. It was a surreal day for all of us.

At CommonPlaces, we build websites for the common good, where people from all backgrounds can gather. We see the Internet, like Boston Common, as a safe, open, and free environment for all. When those principles are attacked, we must respond. Today, more than ever, we wish you all a peaceful, and safer, future. 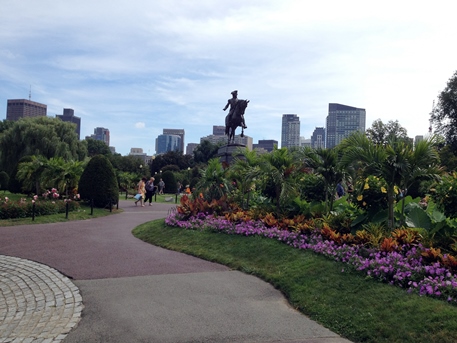 CommonPlaces in News & Culture
The dictionary defines 'binge' as, 'a short period of time when you do too much of something'. The key words here, I believe, are 'too much'. Binge can also be defined as 'a social gathering'. I...
1 min read

CommonPlaces in News & Culture, Development
The excitement in the offices of CommonPlaces got a little crazy this week, and we thought it was important enough to share. A beautiful new website was deployed on Tuesday by one of our clients,...
2 min read

CommonPlaces in News & Culture, Development
Like any industry, Web development has its own lexicon of terms and acronyms. Working with the Web everyday, our team passes these words around the office all day. It's only when we talk to friends...
3 min read

The Deaf Ear of Inexperience

CommonPlaces in News & Culture, Development
There are few things that web professionals can agree on unanimously. The nature of this business relies heavily on "best practices" that can often be of a subjective point of view. That being said,...