Government 2.0: Getting Involved With Social Media 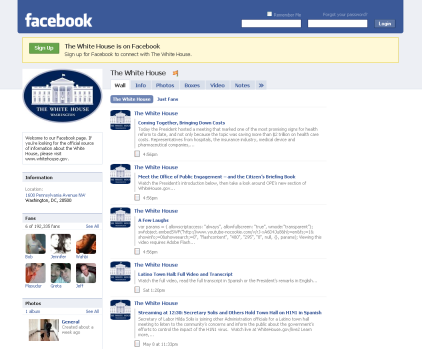 Government entities are getting into social media in a big way. The White House made big news earlier this month with the launch of their Facebook, MySpace, and Twitter accounts. I suppose it should come as no surprise that President Obama, who drew such a benefit from social sites like these while he was campaigning, would turn to them again once elected.

The White House pages on Facebook, MySpace, and Twitter are frequently updated, and offer links to current news. The White House also has a Flickr account, which is already filled with pictures of White House meetings and events.

The White House isn't the only government entity getting social. A quick Google search reveals other levels of government are doing the same thing. The New York State Senate just launched a new website (P.S. it's in Drupal!) and it features those familiar Facebook and Twitter icons in the sidebar. The NY Senate is just starting to use these accounts, but their Facebook page already has a fair amount of engaging content.

Even local government is getting in on the fun. Sandy Springs, GA keeps the community up to date on local events through their Facebook page, and uses their Twitter account to broadcast weather alerts, road closings, and traffic reports. Santa Clarita, CA uses Twitter in similar ways, but residents can also follow @mayordude, Mayor Frank Ferry, and friend him on Facebook.

For anyone who's passionate about social media and the social Web, this is all exciting stuff. The growing adoption of online communities like Twitter and Facebook by all levels of government represents a real tipping point in the history of social media and the history of the Internet as a whole. Many of the government officials who created these accounts had to first contend with the fact that social networking sites like Facebook were blocked on their computers. Now, these people are actively participating on these sites, and it marks a shift for sites like Facebook from trivial distraction to a center of productive collaboration.

Ben Bassi in News & Culture, Design, Development
In an interview with Search Engine Land, an online journal covering all things in the search engine industry, Google confirmed that they have encrypted all search activity performed through their...
2 min read

CommonPlaces in News & Culture, Development
EMILY: "Does anyone ever realize life while they live it...every, every minute?"
2 min read

CommonPlaces in News & Culture
Hi! My name is Laura Bannister, and I am the marketing intern at CommonPlaces for Summer 2019. I just completed my junior year at Cedarville University in Ohio and am excited to graduate next year...