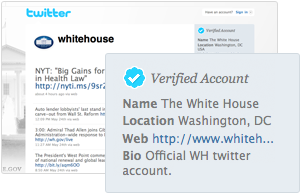 If you've been keeping up with the Twitter world (Tweetosphere?), you'll know that there has been a widespread issue with regular folks posing as their favorite celebrities on Twitter. Shaquille O'Neal, for example, created THE_REAL_SHAQ to combat a Twitter impersonator. Shaq made TV appearances to confirm his Twitter identity, and would even call up some non-believers on the phone.

About a month back, Twitter launched a new feature: Verified Accounts. Basically, Twitter is putting a blue "Verified" icon on select profiles of actors, athletes, and other high profile individuals and organizations (CDC Emergency is pictured below). According to Twitter, the appearance of this icon in the top right of the page means that Twitter has personally contacted the individual in question to confirm their identity.

This has been much talked about since it made its appearance last month. Here are a couple of questions to add to the discussion: