One of our nearby neighbors in Manchester is Special Olympics New Hampshire. This non-profit is dedicated to providing year-round athletic training and competition for children and adults with intellectual disabilities (ID). I recently had the opportunity to spend some time at their offices, getting to know the organization and some of their athletes.

The Special Olympics have been around for over 40 years. We’ve seen the film on the news of their competitions in the summer and winter. There’s the Penguin Plunge in February, when seemingly sensible people race into the ocean (or lake) to raise money and make everyone watching shake heads and wince. You also probably know someone who’s volunteered for the organization. After all, in New Hampshire alone there are over 5,600 volunteers! 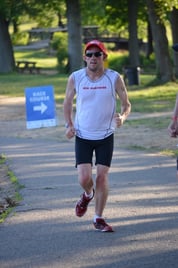 This organization is the world’s largest movement dedicated to promoting respect, acceptance, inclusion, and dignity to children and adults with ID. They offer year-round athletic training and competition; and they provide vital programs devoted to health, research, family support, education, and campaigns for policy reform. They are the largest worldwide public health organization dedicated to serving people with intellectual disabilities, with more than 1.2 million free health screening clinics in over 100 countries.

One of the athletes I met was Charlie Helfrich. A Silver Medal winner in the first Triathlon competition at the 2014 Special Olympics USA Gamesin June, Charlie is a BOD member for SONH. He also reversed his diabetes with his intensive training, making him no longer insulin dependent. This is reflective of the positive change that the Special Olympics can perform.

I also met Pam Langille, who won a Gold Medal in the Triathlon with her competition partner Carrie Hill. Pam is the Receptionist at SONH, a position that she takes great pride in after years of shyness. Along with leadership programs which provide opportunities in nontraditional roles, Special Olympics New Hampshire sets the standards for inclusionary change in our community.

With over 3,000 athletes throughout the state, and all those volunteers, you would think that SONH’s reach would be fairly comprehensive. Yet, they currently serve only about 8% of the estimated population of people with intellectual disabilities in New Hampshire. The organization has set a goal of 20% by the year 2020. Ambitious, indeed!

There are many ways that SONH will take to reach that goal. One method is to raise awareness through social media, and we’d like to help them with that. According to The Nonprofit Marketing Guide, 50% of nonprofit organizations regard social media as “very important”. We would argue that this percentage should be higher. Engagement on and with social media sites can only help to spread awareness about any nonprofit’s mission, accomplishments, goals, and needs.

We urge you to LIKE their Facebook page and follow them on Twitter. There is no obligation here, of course, and you may want to also seek out the Special Olympics pages of your own state, should you not be fortunate enough to live in New Hampshire.

The rewards for supporting a nonprofit like Special Olympics are, however, immeasurable, as are the benefits that this organization brings to us all.

All images provided by SONH

CommonPlaces in News & Culture, Development
Beginning in 2009, members of the Drupal community seized on the notion of promoting Drupal design and theming. The leaders of this movement created a group called Design 4 Drupal, or D4D, which has...
1 min read

CommonPlaces in News & Culture
New Hampshire Governor Maggie Hassan has appointed Ben Bassi, CEO and founder of CommonPlaces, Inc., to the New Hampshire State Workforce Investment Board. The board is devoted to building a strong...
3 min read

CommonPlaces in News & Culture
Welcome to my first blog post! I wanted to share a little bit about myself and how I got to where I am today. I am a senior at Southern New Hampshire University majoring in business administration....
3 min read

Kendra Bassi in News & Culture
2014 was a year of amazing growth for CommonPlaces. In January, there was a visit to the White House. We received not one, but two prestigious awards. There was an eye-opening visit to Austin, and...