Are You Ready For The Drupal 9 Upgrade? 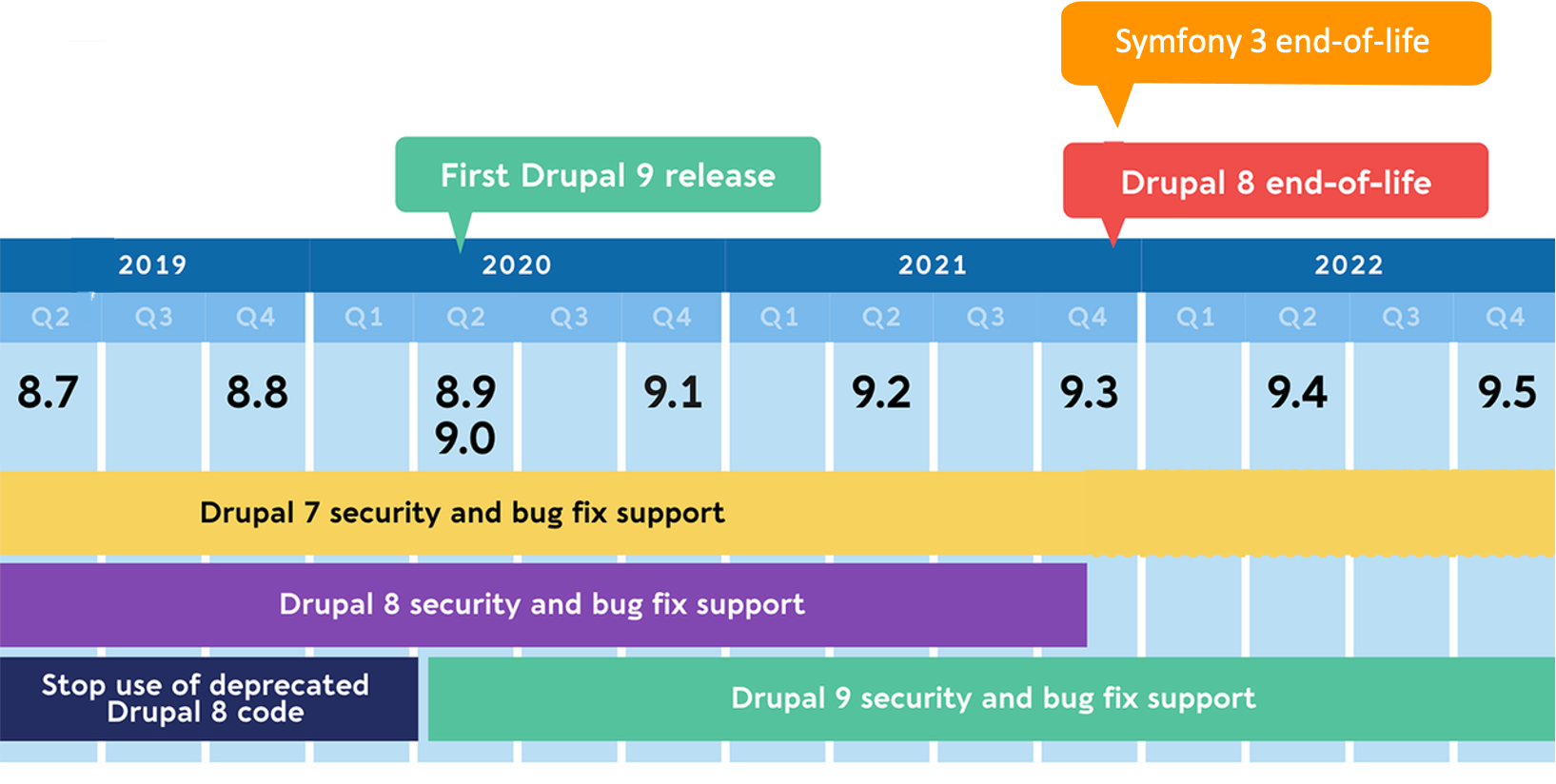 Drupal 9 has made its grand entrance, which means web developers must prepare to say goodbye to Drupal 8. In the world of web development, we are used to adapting our systems and behaviors to ensure the efficiency and security of our work.

Although these changes bring a certain level of uncertainty, Drupal has provided its users with the necessary information we need to continue serving our clients well. In this post, we will cover what you can expect as you transition from Drupal 8 to Drupal 9.

End of Life for Drupal 8 and Symfony 3

Drupal 9 launched on June 3, 2020, to “clean up deprecated code and update third party dependencies” (Drupal.org). Drupal 8 is available until November 2, 2021, which allows Drupal’s users plenty of time to adjust. However, you may want to consider migrating sooner rather than later to ensure security on your sites.

Drupal 9 is similar to Drupal 8 but will offer improved security and compatibility with its third-party relationships. The change from Drupal 8 to 9 will allow the framework to stay up-to-date with Symfony, a third-party library the framework uses. Symfony 3 reaches its end of life in November 2021, which gives Drupal’s users adequate time to transition to Drupal 9, which will support the release of Symfony 4.

Switching to Drupal 9 will not be a drastic change. And to keep things running smoothly, Drupal 9 will offer minor updates every six months during its life. Dries Buytaert, the founder of Drupal, described the ease of Drupal 9 by saying, “The big deal about Drupal 9 is... that it should not be a big deal” - Drupal

Moving from Drupal 8 to Drupal 9 only means running update.php, but this is dependent on your codebase not using deprecated APIs. However, because of the smaller, gradual updates that were previously incorporated throughout the life of Drupal 8, the switch to Drupal 9 should be a smooth process and not cause your team any headaches

What This Means for You

In order to make the change, your site must use the latest minor version of Drupal, and your system must meet the necessary minimum requirements needed for Drupal 9. Drupal recommends continuing with all minor upgrades in the future as well to ensure ease with your sites when major releases become available in the future.

Saying goodbye to Drupal 8 really means saying hello to improved sites. Drupal has made these updates easier with each round of improvements. At CommonPlaces, Drupal is at the heart of our work, and we look forward to utilizing the many benefits of their framework.

If you have any questions about Drupal 8 or 9, please feel free to reach out to us. We look forward to working with you!

Below you will find some additional resources that may be helpful:

What Happens To Drupal 8 Now That Drupal 9 Has Been Released?

CommonPlaces in Development
Greenopolis.com (Beta) was featured as a Gold Sponsor of Drupalcon Boston 2008, a gathering of over 800 Drupal professionals.
2 min read

Ben Bassi in Development
As Drupal 6 gets dangerously close to its End of Life Date, users currently running on that version are left wondering what to do next. Should you upgrade to Drupal 7 or Drupal 8? Your decision will...
3 min read