The Bottlenose Search engine has the power to take some Google's precious search engine market share.

“Move over Google, there’s a new search engine in town.”  And it's a friendly Dolphin. How many times have you heard that(well not the dolphin part) and yet Google has continued to stand the test of time. Google remains the search engine of choice among internet users. In June 2012, Google commanded a 82% market share globally blowing Bing and Yahoo! out of the water. Look for yourself, the map from web traffic-tracking firm, Alexa shows that Google is the most popular website in almost all of North and South America.

So, how does a start-up search engine enter the market and compete? Simple! They don’t. At least that’s what one company is doing.

Bottlenose, is not a search engine, but a “now” engine. It won’t immediately tell you who won the Red Sox game two weeks ago, but it will tell you what specifically about the Red Sox is stirring the most buzz right now. 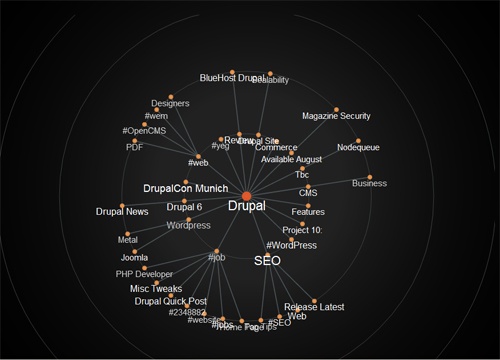 Bottlenose uses software called StreamOS, which is a tool for social listening and trend analysis. The software crawls many different social networks and data streams including Twitter, Facebook, G+, YouTube, LinkedIn, RSS feeds, and more. For my inaugural search, I inputted “Drupal” (what else would we search for here at CommonPlaces?) and was presented with a series of newspaper articles, tweets, and images. All of the results were trending at that particular time. But what I found most interesting about my first Bottlenose search was the “sonar” interface. The sonar interface provides the user with a series of related clusters of information presented on a clever sonar screen. I again searched “Drupal” using the sonar interface and found a web of connected information based on my query.  Keywords and hash tags such as SEO, DrupalCon, Drupal 6, and #OpenCMS were all included in the results. Once presented with this, the user can then expand the results and drill down to what he/she finds most interesting.  What’s interesting is that an hour later, your results can and probably will be completely different.

It remains to be seen how Bottlenose will perform or if it will catch on. It is definitely an interesting concept. Since it is a trend analyzer more than a search engine, it is hard to say that it is in direct competition with Google. It does, however, offer an innovative alternative to normal search engines.  It fills the void that many people (myself included) were left with when Google’s Real-Time search feature was disabled last year.

Give it a shot. Comment and let us know what you think.

Is Google Too Powerful?

CommonPlaces in News & Culture, Design, Development
Let's try a little experiment. Take the title of this blog, and Google it. You will find many, many articles and blog posts with this exact title. Without delving too far back on Google pages, I...
1 min read

Kendra Bassi in News & Culture, Design, Marketing
Should I blog? Yes. Yes. Yes. Here is my list of reasons to start blogging for your business. You've heard all the talk about blogging and its benefits for over a decade, and now you're wondering if...
2 min read

The Future of Search and Search Engine Optimization

Kendra Bassi in News & Culture, Design, Development
Picking the right keywords and keyword phrases is one of the most important steps in successful search engine optimization (SEO). Increasing traffic to your site is a priority, but attracting the...