Announcing the Launch of Drupal 7 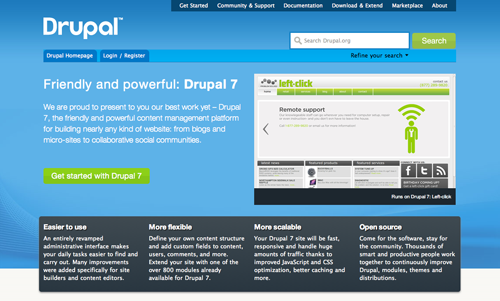 The long-awaited launch of Drupal 7 was finally announced early this morning. Everyone in the Drupal world is excited about what promises to be the most user-friendly, and most capable, version of Drupal yet. With three full years since the launch of Drupal 6 to improve the CMS, creator Dries Buytaert is confident that D7 will drive the increased adoption of Drupal. This morning he tweeted that while Drupal currently powers 1% of the world's websites, he expects that figure to start growing.

From the official press release: "Angie Byron (aka Webchick), Drupal 7 core maintainer, affirms, 'Drupal 7 sports an improved new user interface, accessibility improvements, better image handling capabilities, support for rich content metadata, security features, scalability and database interoperability enhancements, a suite of 30,000 automated tests to ensure stability, and more. In short: it's a tremendous leap forward for the project and for website builders everywhere, we are thrilled to formally release Drupal 7 to the world.'"

To see more, including a video tour, visit Drupal.org/7

The Value of a Scrum

CommonPlaces in Development
We advocate the waterfall method of project development in order to launch a website. Get it up and running so that revenue is coming in the door. Then, we apply Agile methodology to the details and...

CommonPlaces in Development
CommonPlaces is officially a Gold Partner of Acquia. Everyone here is excited and honored by the distinction. Again, we can't say enough how excited we are to be partnered with a company that will...
1 min read

CommonPlaces in Development
There is a great case study available on Acquia.com that details the development decisions that were made for the family of Lifetime Network sites, all of which were built in Drupal. If you're...
1 min read

Ben Bassi in Development
The worst kept secret on the Web is the fact that mobile Internet usage will overtake desktop Internet usage in the very near future. The joke is that there are 6 billion people on the planet, of...